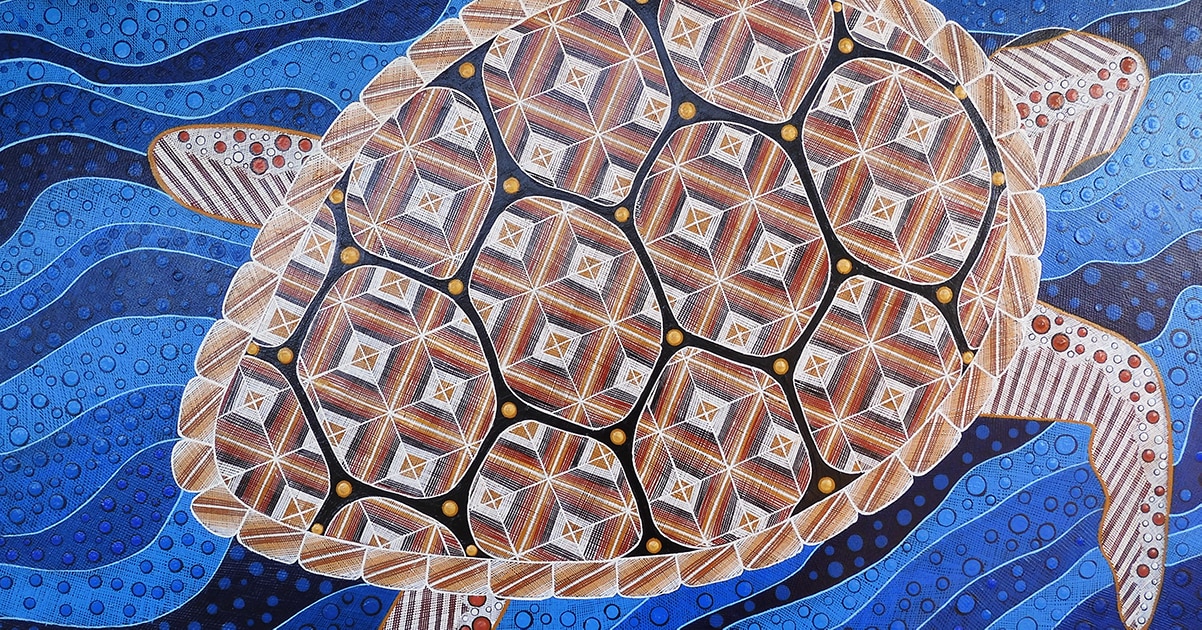 Works by Indigenous detainees from the Alexander Maconochie Centre

I acknowledge the traditional custodians of the land, the Ngunnawal people. I acknowledge and pay my respects to their continuing culture and the contribution they make to the life of this city and this region. I pay my respect to all Elders past, present and future.

‘Totem’ is a virtual art exhibition of 40 detainee artworks selected from the ACT Corrective Services Indigenous Detainee Art Catalogue and showcases the connection each artist has to their totem animals, to the spirits of creation and to their traditional lands. Each piece contains a story and the feelings of longing that come about when a person is away from family and country for an extended period.

The Aboriginal culture is a rich tapestry of beliefs, traditions and ceremonies. One belief is that each person has their own special totem, which could be a natural object, plant or animal, that is passed down to members of a tribe or family as their spiritual emblem. Totems are believed to protect and guide people throughout their lives and come with responsibilities which encompass the sacred sites attached to each tribe’s traditional area.

Totems are often animals that are native to the area a tribe is traditionally from and form an important part of the food source during ceremonies and other culturally significant times throughout a person’s life. An example of this is when a woman is pregnant, she may be permitted to eat the meat of her totem animal, or a young man may eat the totem animal during his initiation into manhood, whereas at other times, eating the sacred animal is forbidden.

Responsibilities include physical maintenance of sacred sites and spiritual management of the ceremonies related to those sites. This responsibility plays a part in defining the roles set within the tribe and strengthening the families’ connections with each other, the land and the spirits of creation.

This exhibition is a visual display of the connection each artist has to their totem animals, to the spirits of creation and to their traditional lands. They are a breathtaking portrayal of the power of totems.

The Alexander Maconochie Centre wishes to acknowledge the Aboriginal and Torres Strait Islander detainees featured in this exhibition, ACTCS Indigenous Services Unit, ACTCS Executive Team and the Minister for Corrections. 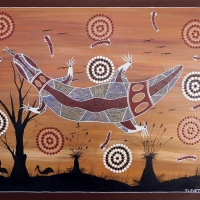 The Australian landscape with a blue tongue lizard, it’s food the witchety grub and some camp sites surrounding it. 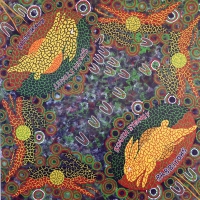 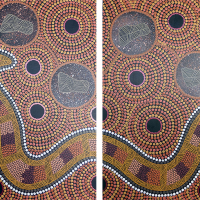 The Journey of the Rainbow Serpent
IDA-045Acrylic on canvas, diptych.

This painting is about the story of the Rainbow Serpent being passed down through the generations and how its journey is continuing through us. 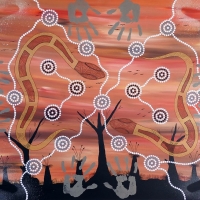 Snake On Our Land
IDA-051Acrylic on canvas.

This shows a long journey through our country and Australia has many snakes. The art depicts the journey alongside the snakes. The hands and the boomerang represent a hunting party. 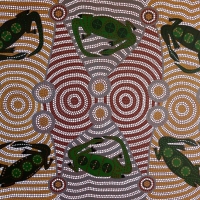 This painting shows a family of goannas. Goannas are a good source of food and are totem animals for some people. 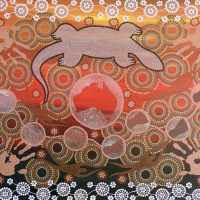 My Journey For Identity
IDA-086Acrylic on canvas.

Throughout my life I have searched to find out more about my black identity and heritage. This painting depicts that journey with the footsteps slowly getting darker as I grow alongside my ancestors and totem. 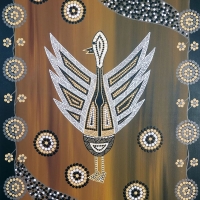 The Bird
IDA-093Acrylic on canvas.

The brolga is an outback bird is often depicted with crocodiles. As I have started branching out with my art I have begun painting more native Australian fauna. 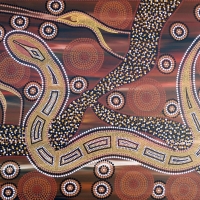 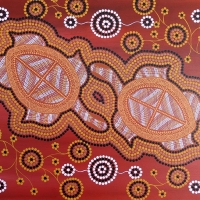 This painting shows two turtles, representing my partner and myself. Always together, even when apart, our hearts are one. 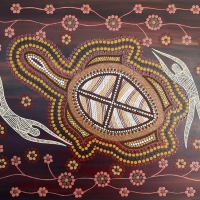 Swimming With Longnecks
IDA-127Acrylic on canvas.

This painting shows me and my missus swimming at the Murrumbidgee River with a longneck turtle. 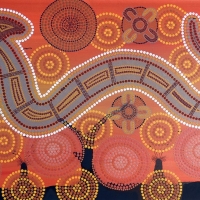 This painting depicts a Rainbow Serpent and the story of the serpent being passed down through the generations of different tribes. 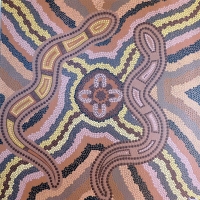 Snakes Around Us
IDA-144Acrylic on canvas.

This picture depicts a campsite with two snakes around us and is a metaphor. Snakes representing “shady people”. Throughout my life I have been surrounded by many snakes who try to pull me backward. 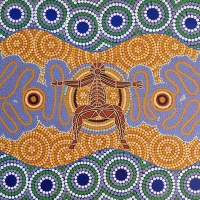 The Wandjina
IDA-146Acrylic on canvas

A Wandjina is a water spirit. This painting depicts a Wandjina bringing water to the people. Here we see it travelling through multiple campsites. 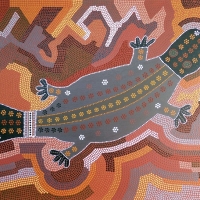 I painted this platypus as a way of extending my abilities as an artist and painting something I have never painted before. I hope others enjoy my work as much as I enjoy creating it. 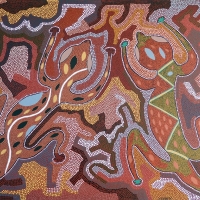 I painted this piece because the geckos are really special to me. Geckos are my totem animal. 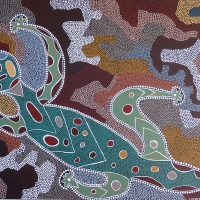 Since I found out that the gecko is my totem animal, I really enjoy painting them and find that the more I paint the more skills I am gaining.