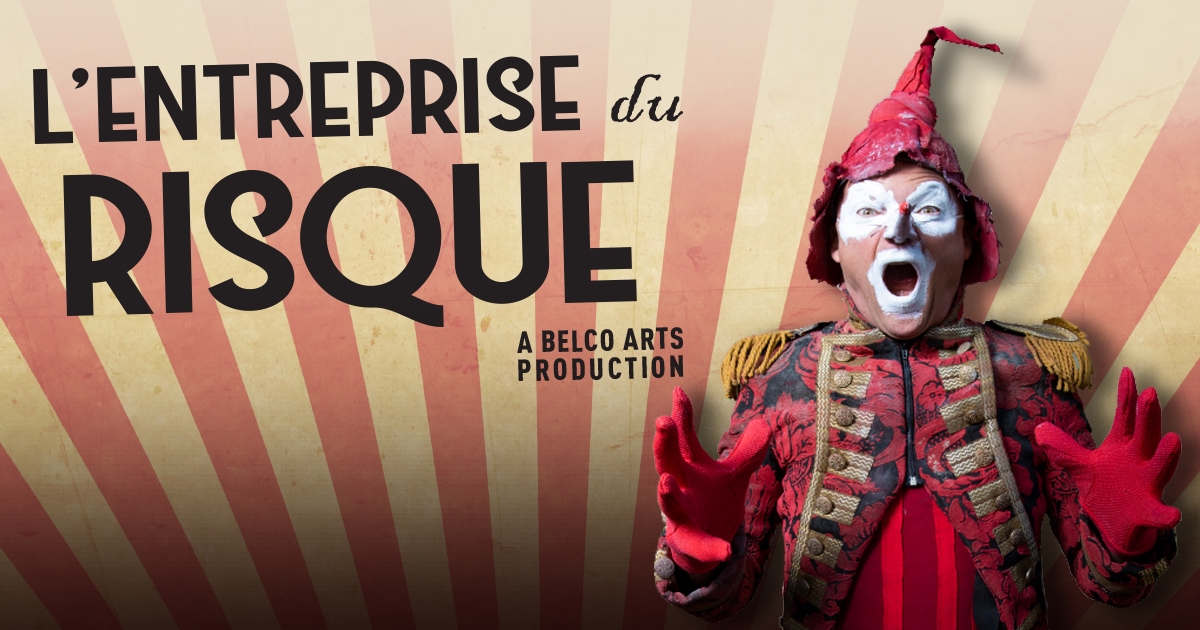 The world is a very risky place.

Every day, we risk heartbreak, loss and disappointment. With shifting climates, shaky economics and disease, these risks have become more amplified and complex. As Belco Arts opens a new multipurpose theatre, we are diving headfirst into the business of risk.

An eclectic mix of acrobatics, clowning and unexpected surprises, L’enterprise du Risque explores dangerous themes in a thrilling experience that places the audience (safely) in a world where performers push the boundaries. Experience the inaugural performance in the brand new Belco Arts Theatre, and a circus extravaganza like no other – we dare you.

To place your ideas and dreams
before a crowd is to risk their loss.
To love is to risk not being loved in return,
to hope is to risk despair,
to try is to risk to failure.

But risks must be taken because
the greatest hazard in life is to risk nothing.
The person who risks nothing, does nothing,
has nothing, is nothing.

He may avoid suffering and sorrow,
but he cannot learn, feel, change, grow or live.
Chained by his servitude he is a slave
who has forfeited all freedom.

Only a person who risks is free.

Presented by the Where You Are Festival with the support of the ACT Government.

Due to social distancing and venue capacity requirements, seat selection is not available for this performance, and the minimum number of tickets available for purchase is two (2). By purchasing tickets to this event, you acknowledge that you will be assigned to the best seating available.

Adam Read, performer (Australia/Germany)
Adam Read grew up in Australia, spending much of his child as a high-profile athlete. He trained at tertiary level in Drama and Movement in Australia, exploring different techniques of theatre such as commedia dell’arte, Le Coq method, Indonesian and New Zealand dance and different forms of mask. He founded the theatre group Laboratorium 33 in Edinburgh, which performed for the first time in the Edinburgh Festival Fringe in 1998.

Based in Europe, he has performed around the world with different companies in street theatre, stage, and site-specific performances, including Cirque Du Soleil, Montreal; Theatre Derevo, St Petersburgh; Grotest Maru, Berlin and Company Barefoot, The Netherlands.

Read has toured his solo performance Eclipse, receiving a Total Theatre nomination in Edinburgh Festival Fringe (2007), and Best Physical Performance in the Pula Puff Festival in Croatia (2008). Adam has a long-standing collaborative relationship with Norwegian group Vegard Vinge and Ida Mueller in Berlin and Norway. He has created original performances that have toured internationally consistently since 2010.

Jake Silvestro, performer (Australia)
A circus and visual artist, Jake focuses his artistic output on narrative, collaboration of forms and acrobatic research. With a passion for creative experience and boundless energy for physical movement, Jake has carved a career in multiple art forms since 2010. He has toured internationally with Circus Oz, Circa, Casus, Company 2, Dislocate, Lingua Franca and G.O.P.

Jake was the founder and director of Poncho Circus in Canberra which produced and toured physical theatre productions between 2012 – 2017 around Australia. Outside of his touring work with professional companies, Jake has maintained his own projects and explorations to continue his arts practice. He illustrated a children’s book that was published in Argentina, helped build props for recent NICA graduate students, performed at the Edinburgh Fringe Festival in 2019 and has spent time researching his creative practice to further develop his signature movement techniques.

In 2018, Jake put a spotlight on the circus sector with a viral Instagram trend called ‘Hurricane,’ which encouraged artists to showcase their unfinished work and generate support for the creative process of circus.

Imogen Drury, emerging performer (Australia)
Imogen has trained with Warehouse Circus in Canberra for the past seven years, finding her passion for circus through aerials, tumbling, adagio and teeterboard. Imogen loves creating acts and developing big ideas, and works hard to improve her performance value and skill set through every opportunity that comes her way. The upcoming L’entreprise du Risque project provides Imogen with a huge opportunity that she feels excited and lucky to take part in, and she is hopeful to continue her experience in the industry and gain further performance opportunities in future events.
Clare Pengryffyn, emerging performer (Australia)
Clare had her first taste of circus nine years ago, when her grandparents enrolled her into her first holiday program. Clare immediately fell in love with all that circus offered and joined weekly classes, starting at beginner aerials where she worked hard on her skill set, to now being a member of the Warehouse Circus Southside Performance Troupe. With a background in dance and music, Clare has excelled in her training and specialises in Lyra and contact juggling, with hopes to one day travel around the world performing circus before moving onto directing and writing circus shows.
Olga Dumova, costume designer (Australia/Israel)
Olga is an expert in many styles of costume design and production including classical, traditional and modern. She specialises in textile design, different print and dye techniques as well as masks, hats, accessories and dolls. Originally from Israel, she has travelled the world creating costumes for numerous companies, including Israel Opera, Moscow Ballet, InternationalSo Theater (Portugal), Vampire Dance Project (China) and Circus Imperial (Israel).
Bernard Bru, aerialist and rigger (France)
Bernard has been involved in street theatre companies and circus skills teaching (Supercrampe in Reims, Culbuto in Paris) for 10 years. Following the moment in 1988 when he sat on a trapeze for the first time in Montreal, Bernard knew immediately that his life would be directed by a passion for aerial arts. Since that day, he has never stopped developing skills on trapeze or on specially designed apparatus; an aerial kimono, an aerial skateboard, an aerial train window, and more recently an aerial moon and an aerial tree. Bernard is passionate about passing the aerial skills that he has developed on to anyone from two to 102 year-olds (this limit is, of course, negotiable).