“I started to build those pots with my hands when I remembered my father.”

This is Loretta Halloran’s first solo exhibition, celebrating her love of working with clay and connection to her Ngunnawal culture. Her work represents the Ngunnawal river systems, infused by memories of her childhood, in particular her father. These works are all from private collections. 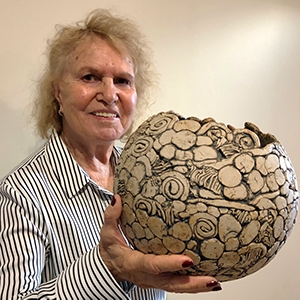 Loretta Halloran, a Senior Ngunnawal Elder, grew up in ‘Hollywood’ a mission just outside of Yass. It was during her childhood that Loretta learnt her Ngunnawal roots of spirituality, art, storytelling and singing. She continues to pass on and share her knowledge and love of her culture with her eight children, 14 grandchildren and 16 great-grandchildren.

Loretta found her love of pottery in her fifties and completed her Certificate IV at Tumut TAFE. It was during this time she found her language in clay and firmly positioned it within her Ngunnawal culture, inspired by the father who taught her how all things, such as the trees, rivers, stars and moon, were interconnected. He taught her how to fish when the fish got sleepy; how to trap rabbits and swim in the Yass River, and about Ngunnawal culture.

Arthritis made it difficult to use a pottery wheel, so she resorted to hand building. This enabled her to replicate the lines of the river through the use a simple garlic crusher, and having no kiln herself, she baked the pots in a communal kiln at Tumut Potter’s Society.

Loretta’s work beautifully captures her connection to her father, her country, the adventures enjoyed and the stories he told her. 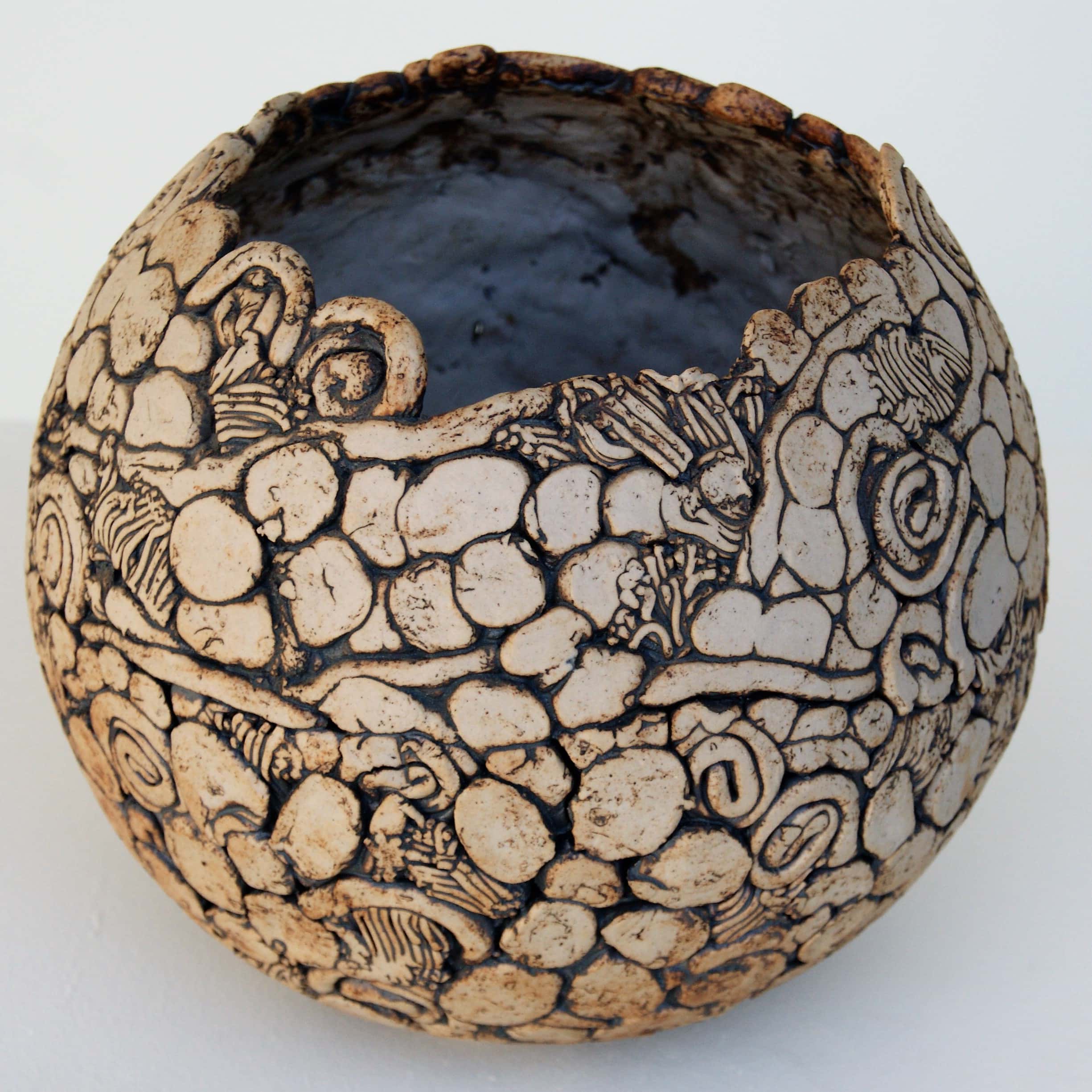 Nidjulangu2015
Belonging to those two persons. I belong to my parents, Ferdie and Ivy Bell with my ancestral connect to King Andy Lane. I was born on Hollywood Mission, Yass. We had a hard life, but happy times too. My father was a great worker. He never stopped working and bringing food home to put on the table. As children we would pick up wool from dead sheep in the paddocks of surrounding properties and sell it to the wool sheds in Yass. 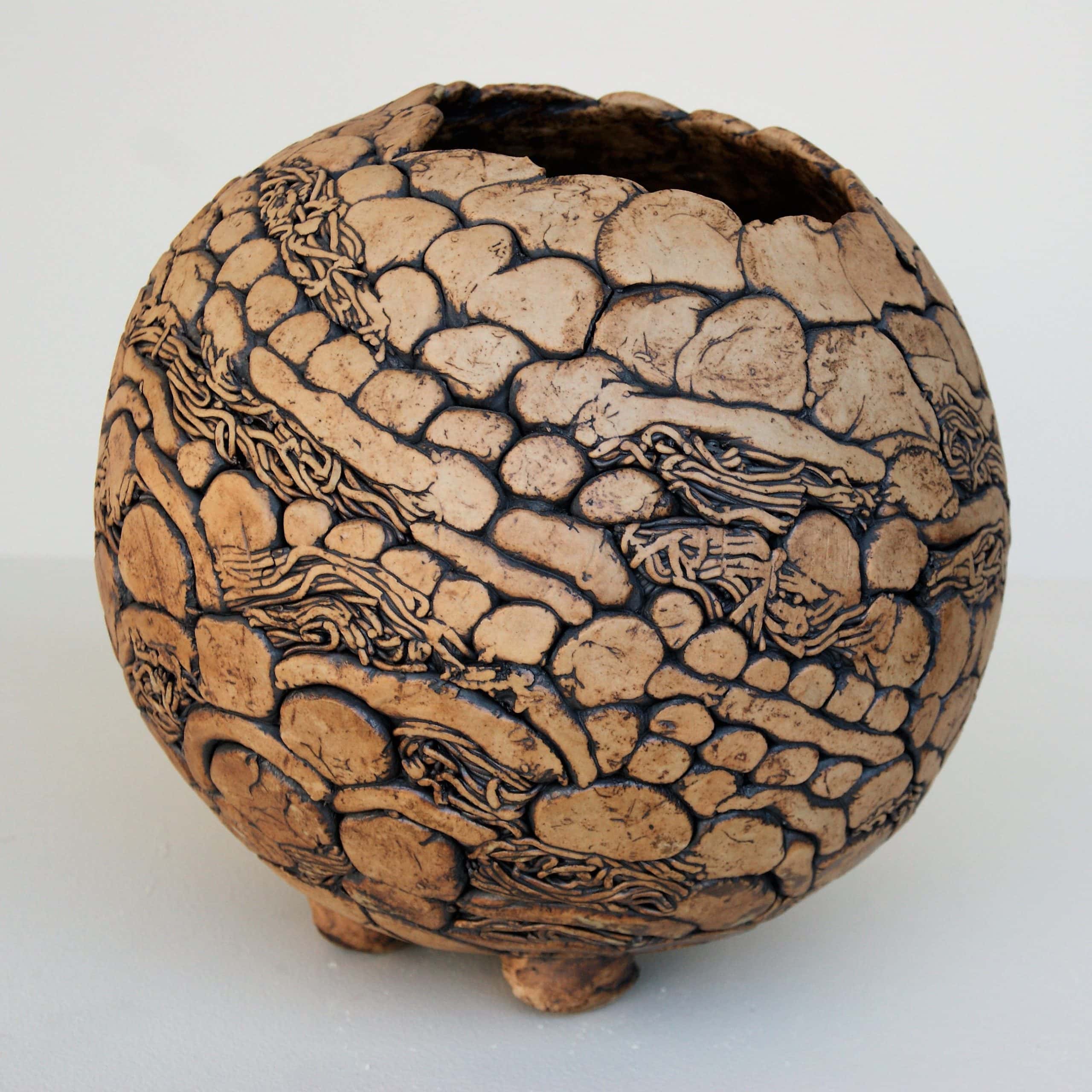 Dhawura Ngunnawal – Ngunnawal Country2013
Growing up with my father teaching me fishing, and the stories of our people, Ngunnawal People. This tells the story of our vast Ngunnawal country from Boorowa, Goulburn, Braidwood, Namadgi, and all between; including the ACT. The circles represents the people and our connection going back to our ancestors. 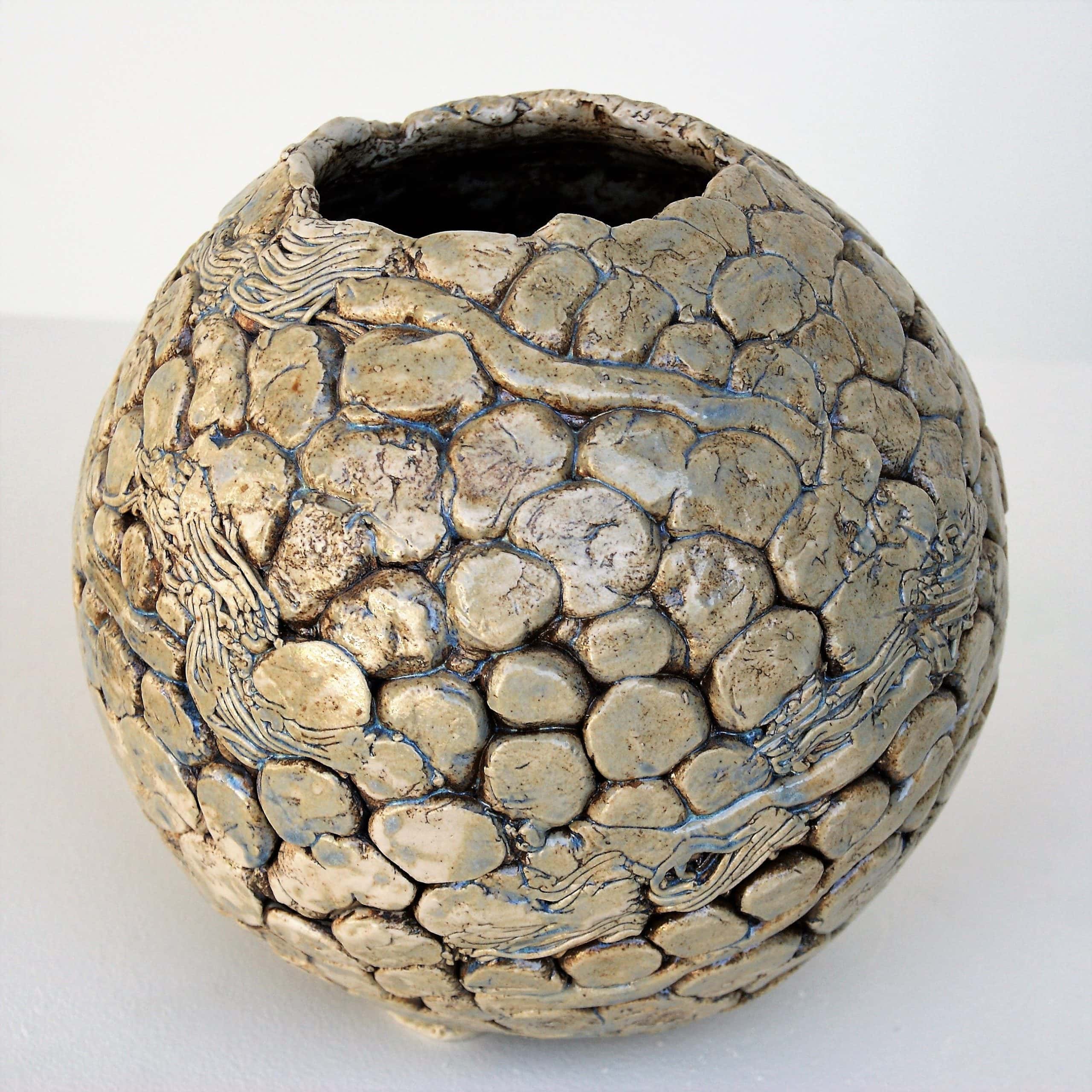 Djinindjinindiri – Sparkling – throwing out little rays of light2018
My Mum and Dad would hide us from the welfare and police. They often told us to run and hide where we could. Sometimes it would be down by the creek. Hiding in the bushes. Sometimes I fell asleep and would wake to see the sun reflecting off the water. Little rays of light sparkling on the water as the fish were swimming through the currents. 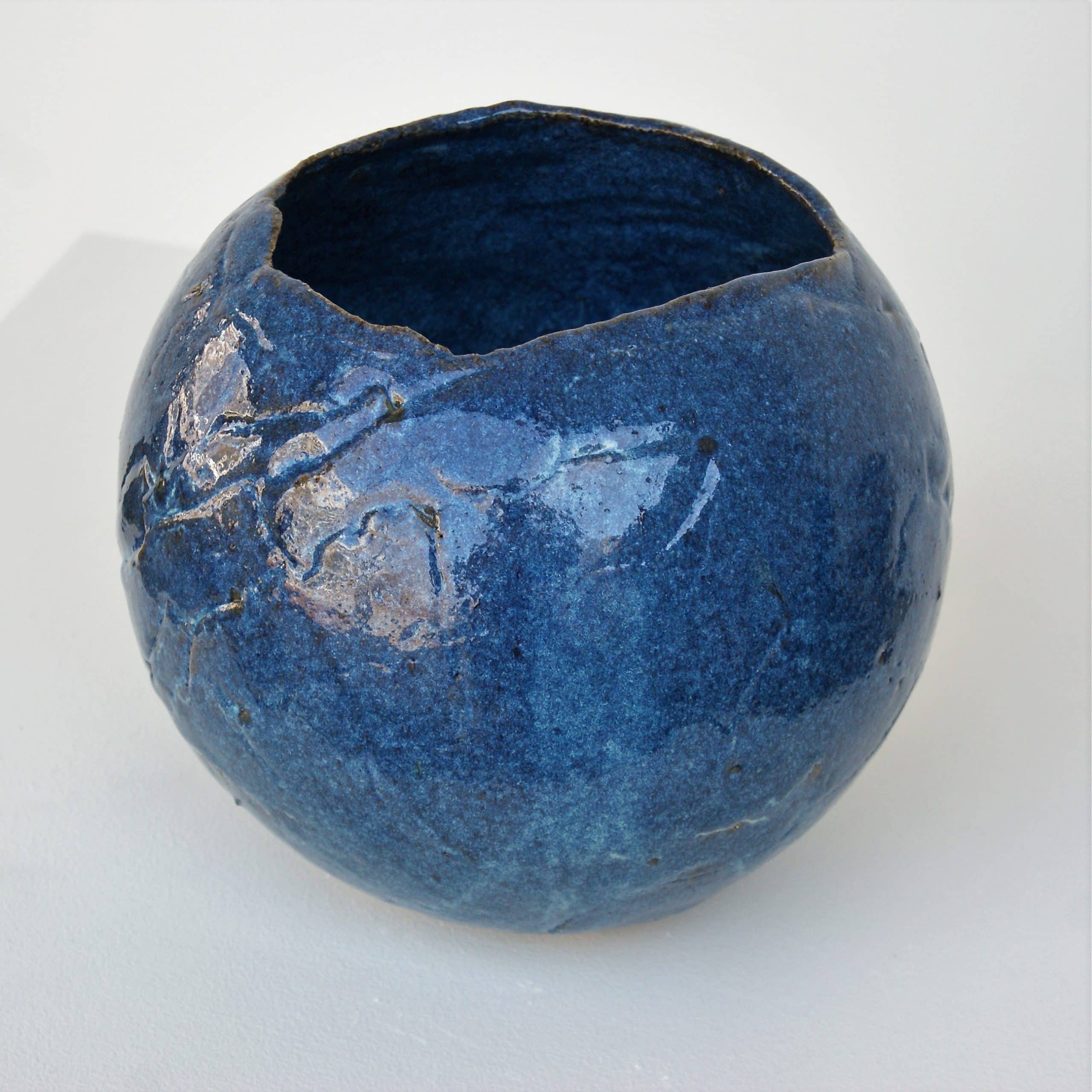 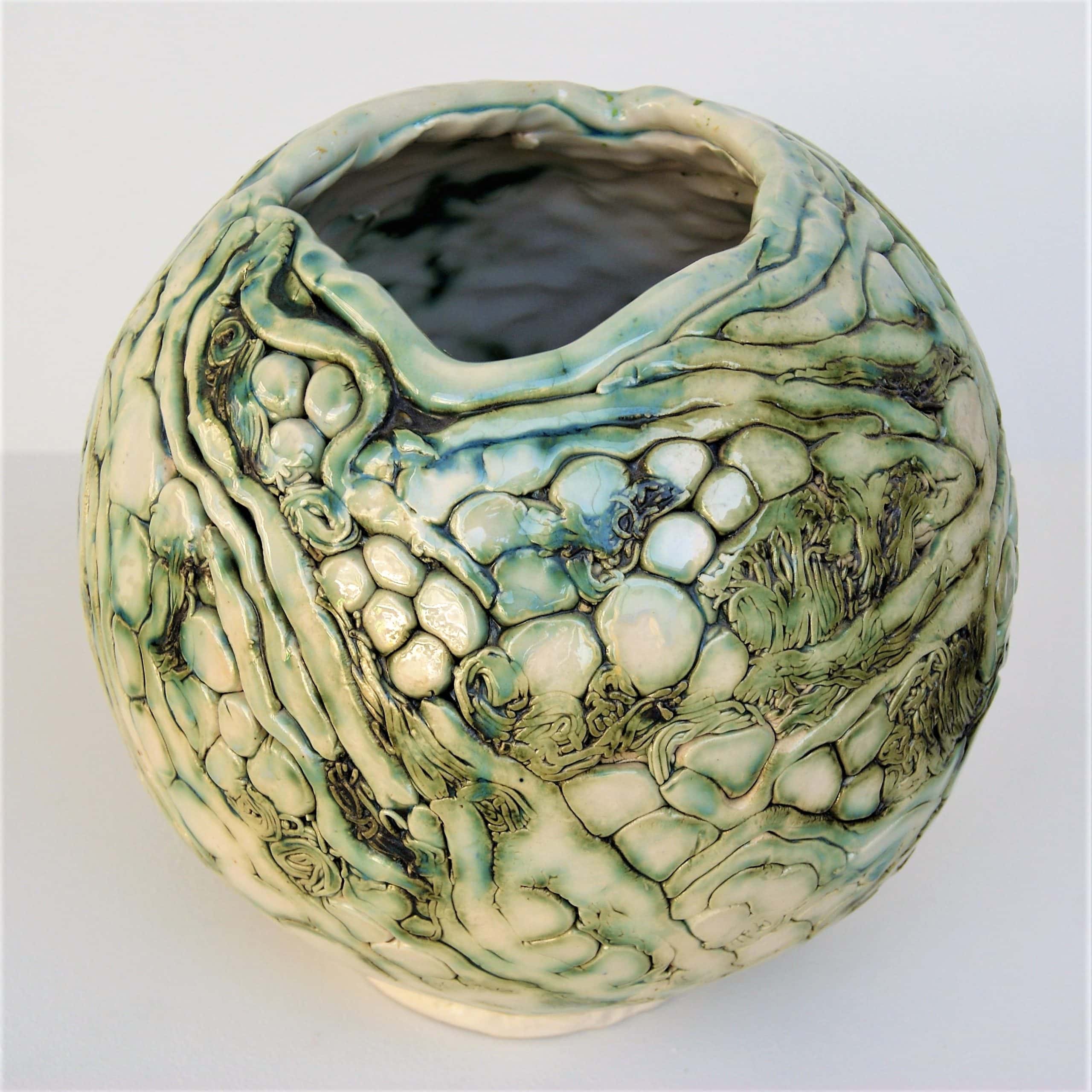 Naraganawali1998
Alive, well-being, coming together – healing energies that encourages love and healing. The green represents growth. The long lines represents our journeys. The circles our kinship and connections to our Ngunnawal spirituality and ancestors. 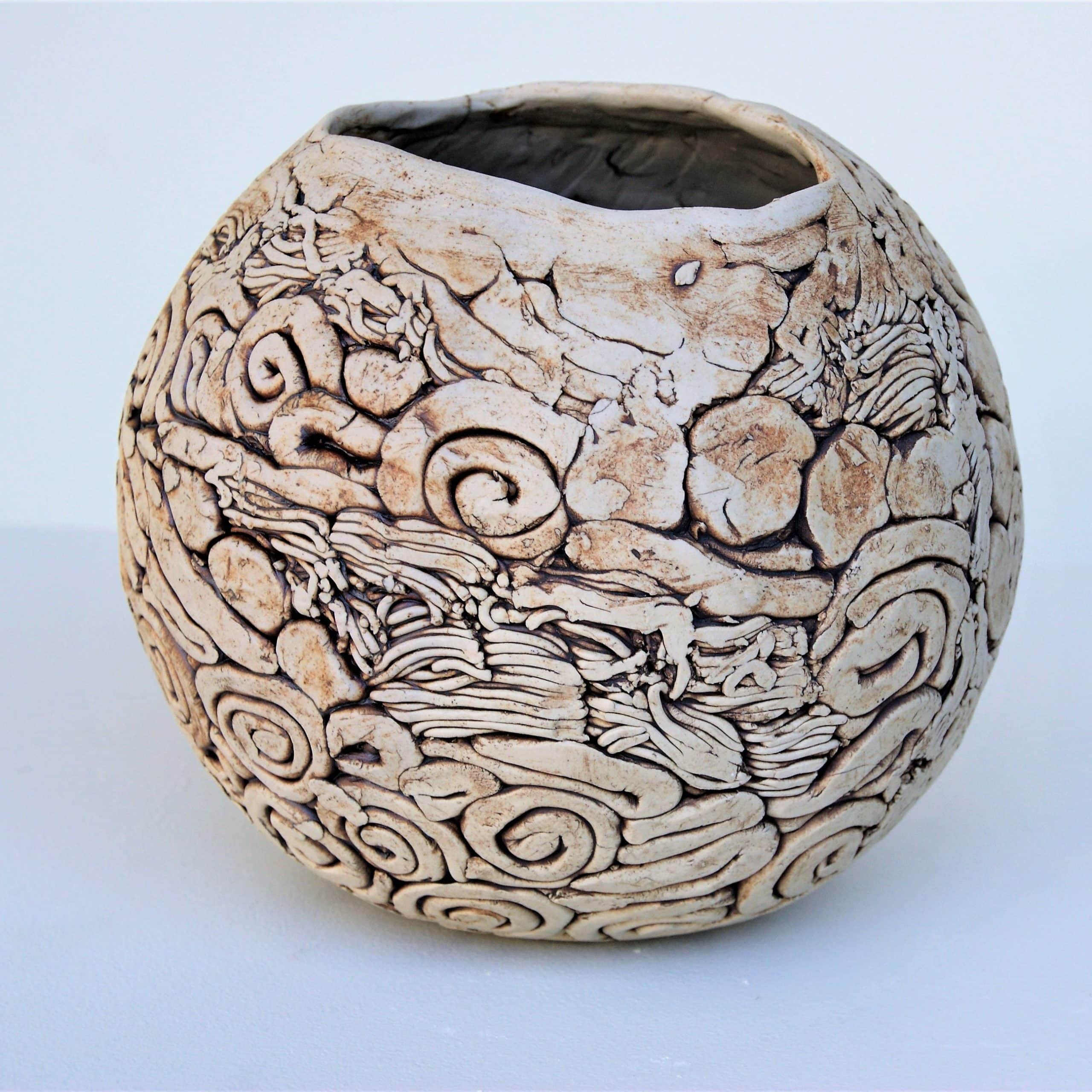 Ngura Yarr – Ngunnawal Home Yass2005
Hollywood Mission – Ngunnawal. Our borders include Boorowa, Goulburn, Braidwood, Namadgi, Harden, Murrumbarah, and all places inside those boundaries. As a child we were taken to many places across Ngunnawal country and shown that this is where our ancestral spirits gave us our lores and law for connection to our lands and environment and all life within. Ngunnawal identity and a sense of belonging. Our law is the basis to everything we do and how we interact. Our Ancestors taught our peoples the ways of living in country, how to care for animals, plants and each other. These ways were called Law. ... It's been handed down by our ancestors. 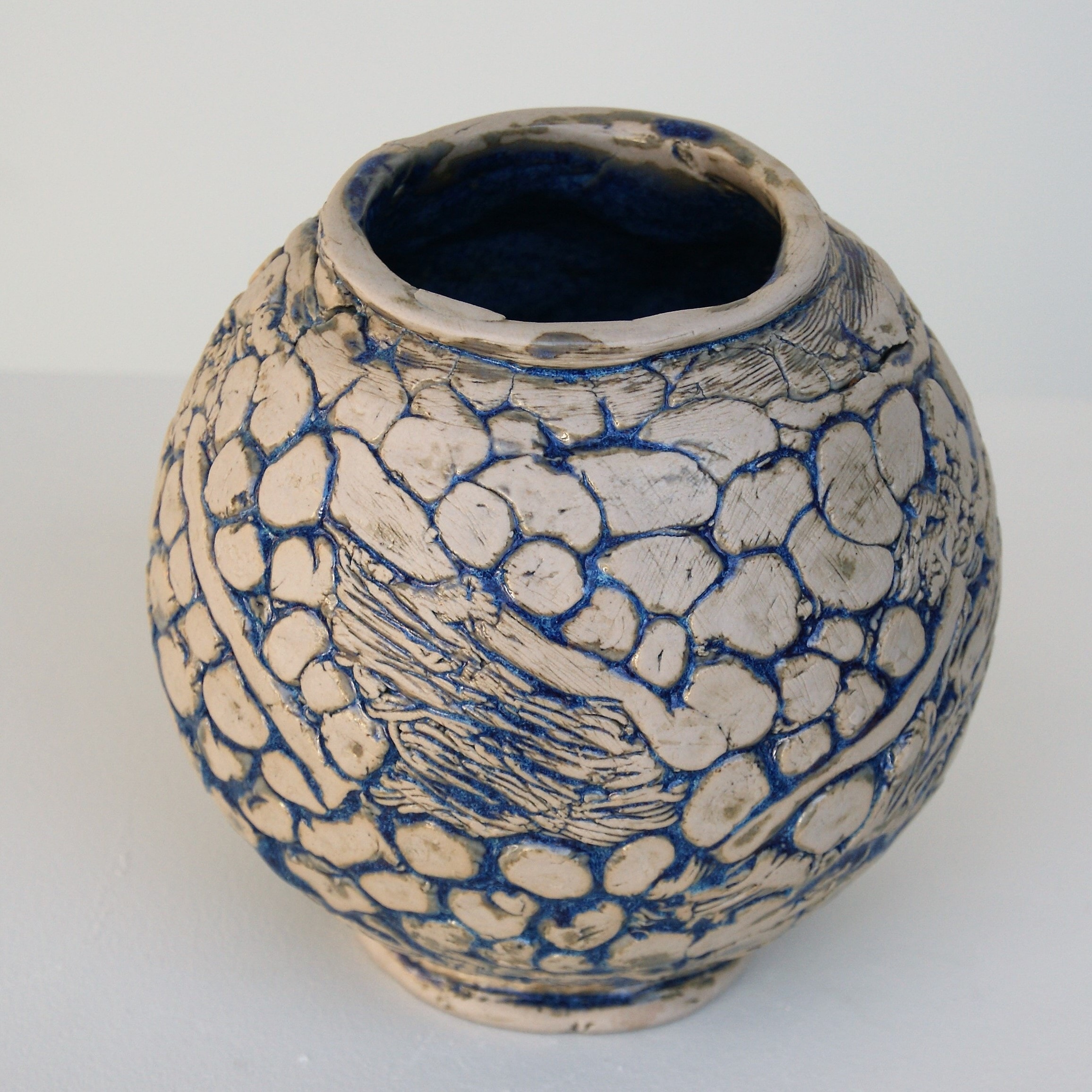 Ngarambanda Yaban Corroboree on Country2018
My grandfather was a living legend in Yass – my father’s father. He was known as Piggy Bell. Old Pa and Daddy had done a corroboree up the main street with other Ngunnawal men for Queen Victoria’s birthday. They would all sneak off at night to do corrobborees as it wasn’t allowed. The police would lock them up. 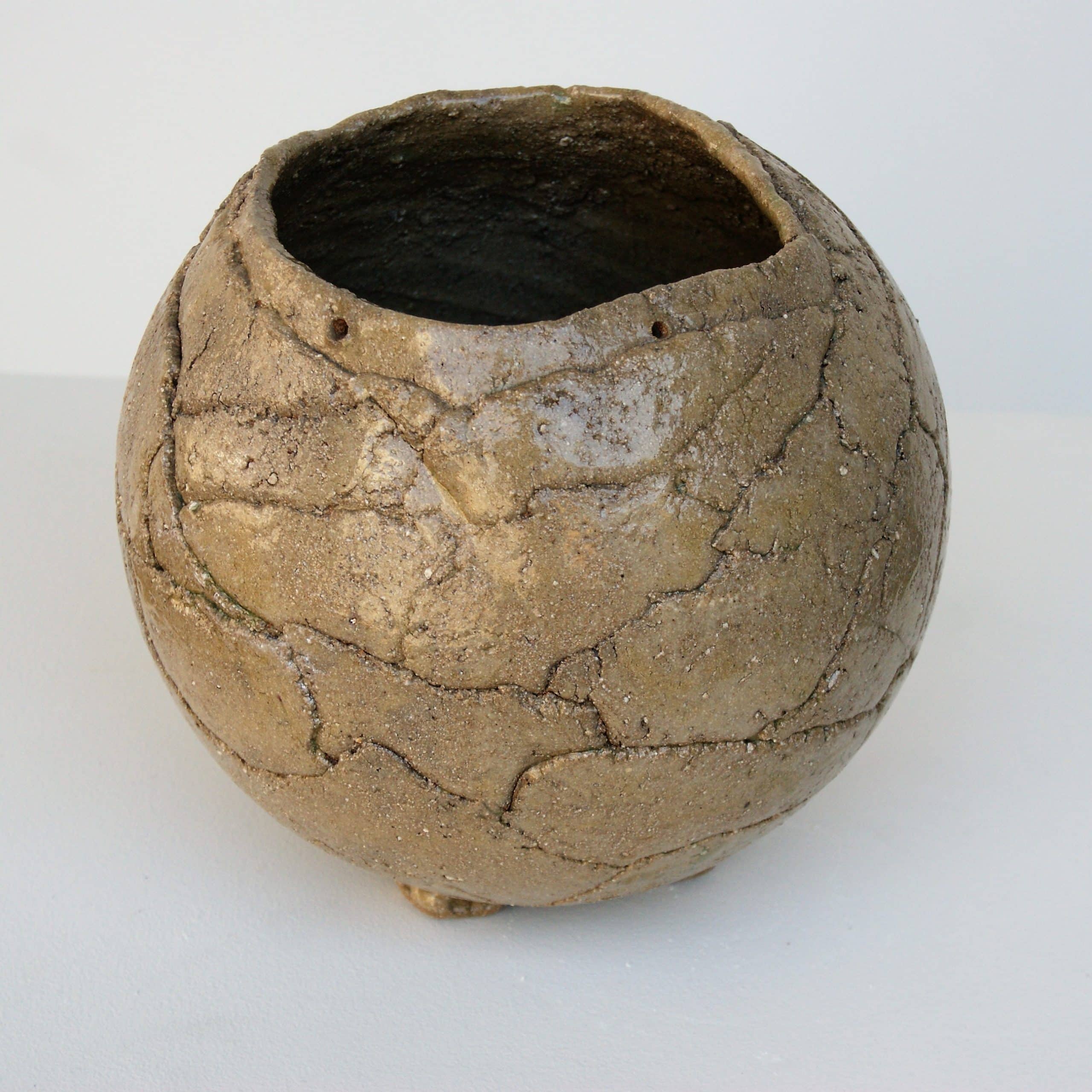 Gaadhi2017
Search. A dreaming story of searching. A solo journey of living life ‘My Way’. Many cracks and yet I have more than survived, I have prevailed racism, adversity, hunger, being stolen and many other challenges. A fiery and passionate life journey that was ultimately fulfilled with love.