In response to isolation and social distancing measures necessitated by COVID-19, Gungahlin Arts put out a call-out for artist with a strong connection to the Gungahlin region to spend some time reflecting and creating works for presentation within their local community in 2021 – once we can physically come together again.

Artists who live and work within a particular community have a unique understanding of place, and Art in Place drew on this knowledge to create a series of works which allow the wider community to develop a deeper connection to the place they call home.

Five artists were selected to participate in the program and share their unique take on Gungahlin and its surrounds. Gungahlin Arts supported the artists with and artist fee, mentoring opportunities, technical, conceptual and production assistance. Each project was presented as part of the celebrate Gungahlin Festival in March 2021. 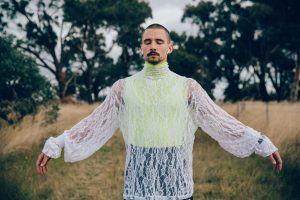 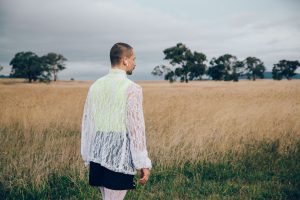 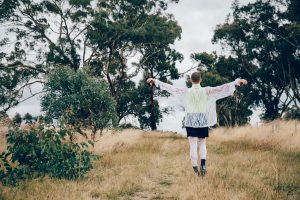 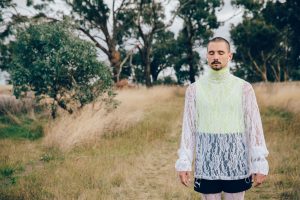 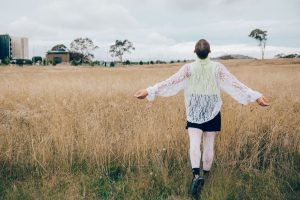 James Batchelor is a choreographer and performer whose work is known for its visual clarity, architectural sensitivity to space and rhythmic playfulness.

He grew up in Palmerston and his childhood was characterized by exploring the area by bike and on foot, becoming familiar with every street-sign and the mountains they were named after, climbing hills and wandering into long grass-fields.

Shortcuts to Familiar Places explores how movement language and ideas evolve through systems of bodied transmission. In this work James excavates the lineage of his mentor Ruth Osborne, tracing back to the early 20th Century Modern Dance pioneer Gertrud Bodenwieser and the Ausdrucktanz (Expressionist dance) movement.

Staged in the Mulanggari Grasslands in Gungahlin where James grew up, the performance evokes the exploratory roaming of the suburban oasis from his childhood that is woven through his movement language. This draws a parallel to local artist Sally Holliday’s woven grass baskets, conjuring the image of the moving body as a constellation of gestures and interlaced memories.

Audience members are invited to bring their own devices and headphones to listen to an original soundscape by composer Morgan Hickinbotham that combines synth Polyrhythms with natural sounds collected from Uriarra Crossing and Lake George.

Shortcuts to Familiar Places is supported by the Australian Government through the Australia Council its arts funding and advisory body, Belco Arts through the Art in Place program, Fonds Darstellende Künste, QL2 Dance and Fabrik Potsdam. 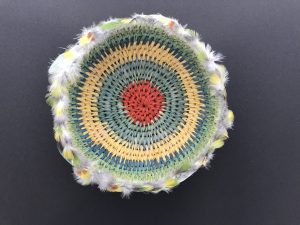 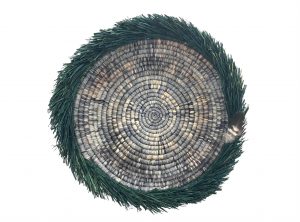 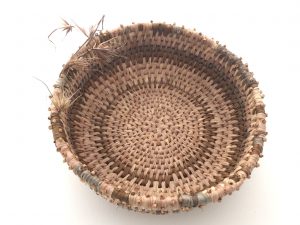 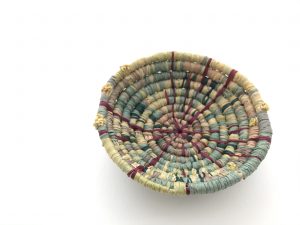 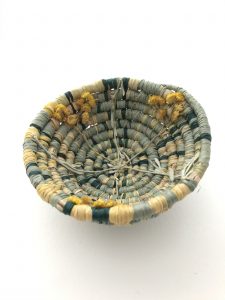 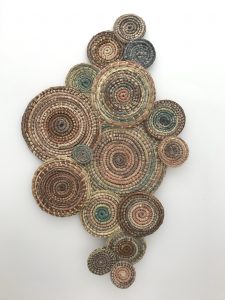 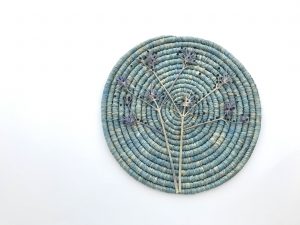 Sally Holliday’s art practice explores the therapeutic and transformative potential of the making process for herself.   ⁠

“Around the onset of coronavirus, I fell in love with my neighbour – a rippling grassland by the name of Mulanggari. Walking in the reserve became an active meditation for me, an act of wayfinding within.

I’d while away hours noticing details, observing patterns, witnessing changes. A kangaroo print left behind in the mud. Clusters of little yellow button flowers swaying in the breeze. The quiet pond sky-mirroring the mood of the day. Frogs conversing in the reeds. For me, these sites and spaces became touchstones of inner-wisdom. With sage lessons to impart, they’d guide me home to a sort of deep-knowing within.

It is this felt-sense I endeavour to evoke and integrate into my work. Whilst creating my weavings, I walk my fingers around my work as if retracing my steps in the grasslands. With each stitch, I invoke and interweave those quiet teachings of nature. Mulanggari and I are interconnected. We share a reciprocal relationship, both custodians and care-takers. I look out for Mulanggari, and it looks out for me.” 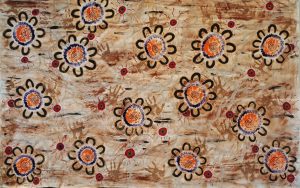 Ritchie Allen, is a Ngunnawal artist and knowledge holder, whose paintings depict the stories of the traditional owners and keepers of the land known as Khambuura. ⁠

“There is evidence that Ngunnawal people who are the true owners of Khambuura and Region have links with the Canberra land for at least 65,000 years. The Ngunnawal Descendants still live in the region today and still practice our Dreaming in the same way as our Ancestors did.⁠

Antoinette Karsten: Around Gungahlin, Around the World 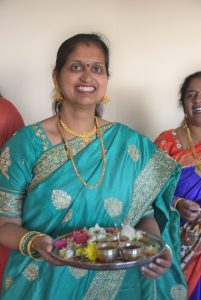 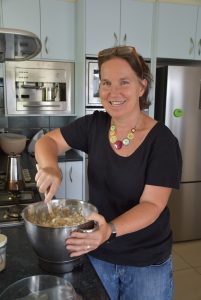 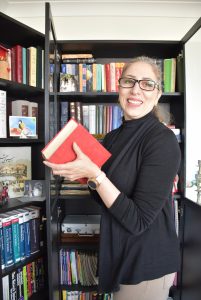 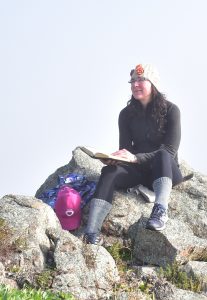 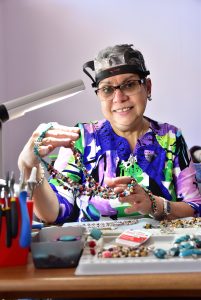 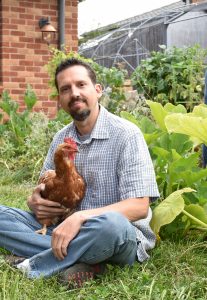 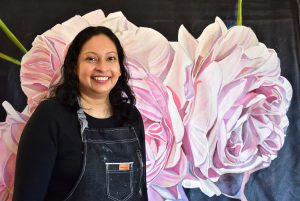 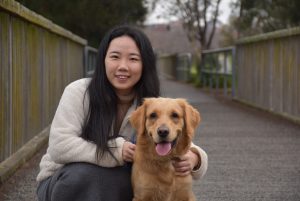 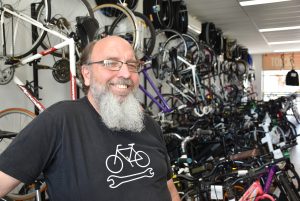 Antoinette Karsten primarily works in sculpture and painting, but photo-documentation is also an important part of her practice.

She has lived and worked in Bonner since 2011, and has found an extraordinary community in the region. Herself a migrant from South Africa, Antoinette now has a network of friends hailing from Australia, Sri Lanka, India, South Africa, the USA, Iran, Austria and China.

For Art in Place, Antoinette drew on this local network to create a series of photographic portraits and stories which reflect and celebrate the diversity of the Gungahlin community.

“We should have known in our first weeks here in Gungahlin, when some of our kids’ first friends were Chinese and Korean and our neighbours were Sri-Lankan, that we just moved into a vibrantly varied cultural environment.

And so it was. This project provided a very special glimpse into the daily lives, celebrations and dreams of some of our culturally diverse friends and fellow Gungahlin residents, and presents fragments of their life stories as hints to both our peculiarities and similarities.

Why travel? Make friends in Gungahlin and experience the world in a nutshell. 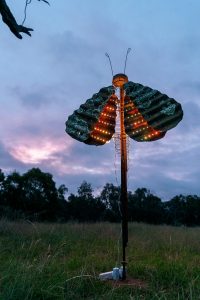 Hayden Starr has an education in Digital Media and his initial practice of video art became a gateway to more physical, dynamic art forms that play with material relationships, and facilitate spatial and temporal experiences.⁠

Hayden’s recent works are sculptural, and when considering a work for Art in Place his thoughts immediately turned to Kinleyside Nature Reserve, an offset area managed by his family under rural lease for over 50 years. ⁠

Hayden spent much of his childhood in this area, helping out on the farm and exploring the bush. Originally planned for development, the area protects endangered Box-Gum Grassy⁠ Woodland and is home to the critically endangered Golden Sun Moth. ⁠

⁠With Kinleyside, there is a mutual protection relationship, where the moths helped preserve the land that⁠ fostered Hayden’s love for nature and the region’s landscapes, and in turn, the moth’s fragile habitat has been preserved.⁠

“Golden Sun Moth is an embodiment of my connection with the Gungahlin region, which is primarily through the farm near Hall that my family has managed for over 50 years, Gold Creek Station. This land is a habitat for the critically endangered golden sun moth. A sense of mutual protection is expressed, as my family helped to protect the moth’s habitat, so too did their presence prevent further suburb construction and development of a section of the farm. Thus, preserving the land that helped foster my love for the natural landscapes of the Canberra region and the flora and fauna that inhabit it.

The materials that comprise Golden Sun Moth were largely foraged from Gold Creek Station, sourced from old fences and abandoned sheds. The lichen and rust coating the wings highlight the passage of time, as well as the relationship between man and nature that agriculture straddles. The atrophy of the wings serves to highlight the fragility of the moths, both as a species and as individuals — adult moths only live for 1-4 days.

The lights that shine through the inner wings are representative of the brilliant golden inner wings that give the golden sun moth their name. They endeavour to provoke a sense of wonder and discovery akin to my own childhood experiences, discovering the various inhabitants of the land that I grew up on. Golden Sun Moth also has a strong personal and familial connection. My father Craig Starr and grandfather John Starr, assisted with the construction. Throughout the process and time spent with them I forged a renewed connection with family and a reflection upon my origins.”